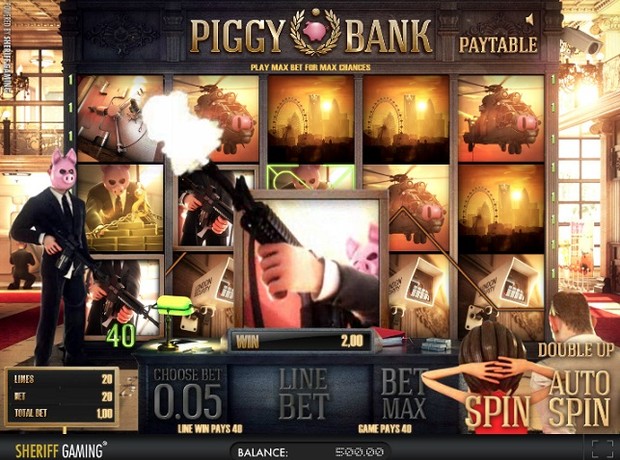 Piggy Bank is a brand new 3D slot machine that was released towards the end of March, 2013. This slot has 5 reels and 20 winning paylines and it has a bank robbery theme. It could also be classed as a crime/gangster themed slot machine. Some people may even class this game as having an animal theme because of its title.

If you have never experienced playing on any of Sheriff Gaming’s cutting edge slot machines, we recommend checking them out when you get the chance. Not only are the graphics and the sound effects fantastic, but the general gameplay on all of their slots is quite literally unrivalled and you can even watch some immersive intros just before each slot loads.

This new online slot can be launched either in the free play mode or in the real cash mode. The lowest cost for just one spin of the reels will set you back just 0.20 coins (if you play with the recommended 20 paylines activated per spin) and the most that you can spend on just one spin (with all 20 paylines active), is 100.00 coins. After each line win during regular play, you can select the Double Up feature to try and increase your winnings even further.

This game has a unique special feature called the Multiplier Bonus. This is triggered when the hand grenade symbols land in the high-lighted centre position on the middle reel. Random multipliers are then thrown onto the reels and they will then be used in a winning combination where possible, before disappearing from the reels. These random multipliers will only ever be added to reels 2, 3 and 4.

When three of the Click Me bonus symbols appear in view, a mini bonus game will take place on the reels where you are guaranteed to win a coin prize. There is one other bonus round on this slot, which is simply called Feature Bonus. All you have to do is continue making picks from a grid of 20 items, revealing prizes as you pick. If you happen to reveal the word ‘collect’, the game will come to an end.

This fantastic new slot is literally loaded with action an excitement and it has a theme that should appeal to most players. The payout structure is superb and you can now access the Piggy Bank slot instantly without having to install any kind of software onto your computer. The entire collection of Sheriff Gaming slots are non-downloadable.