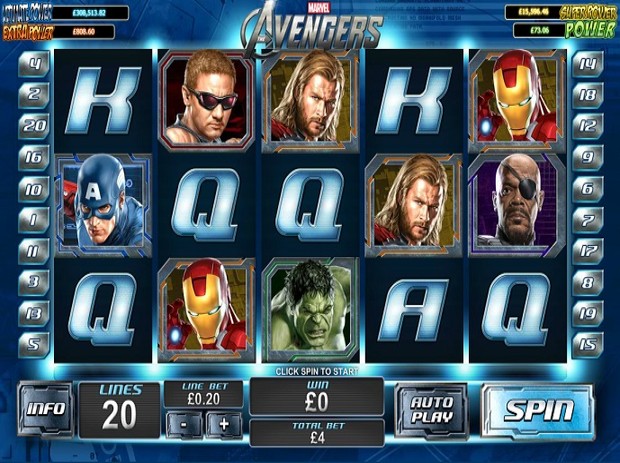 The collection of Marvel Multi-Level Progressive Jackpot slot from Playtech keeps on growing and their very latest one is The Avengers. This was released just weeks after they released two other slots in this same series, Iron Man 3 and Captain America.

The main bonus feature is automatically triggered when three or more of the 'The Avengers' Logo symbols land in any position across the reels. You will then get to take part in a picking round. This picking round takes place on a second screen and the aim is to match three symbols to win that same bonus round.

You will get to pick from a grid which contains 20 symbols and if you happen to find Loki, the bonus round will automatically come to an end.

For example, during the Captain America Mode, he will appear on screen after each Free Spin and award a multiplier ranging from 1X up to a maximum 5X. During the Thor Mode, he will also randomly appear on the screen an award additional Multipliers.

During the Hulk Mode, Hulk will appear stacked on the centre reel for each spin and he will act as a Wild Symbol to combine with other symbols and generate additional line wins. During the Iron Man mode, Iron Man will increase the Multiplier after every third free spin and the special symbol in the centre of reel three will also act as a Wild Symbol.

One of other special bonus features on this slot is called Avengers Assemble Feature. This is triggered when Captain America, Thor, Iron Man, Nick Fury and The Hulk appear in consecutive order along any of the active paylines. You can win up to 200X times your stake when this is triggered.

Don't forget that this slot also has a progressive jackpot bonus round which can be triggered at any time. It has a wide betting range to cater for low rollers and high rollers and it can now be found at a leading United Kingdom online gambling site called Betfred Casino.