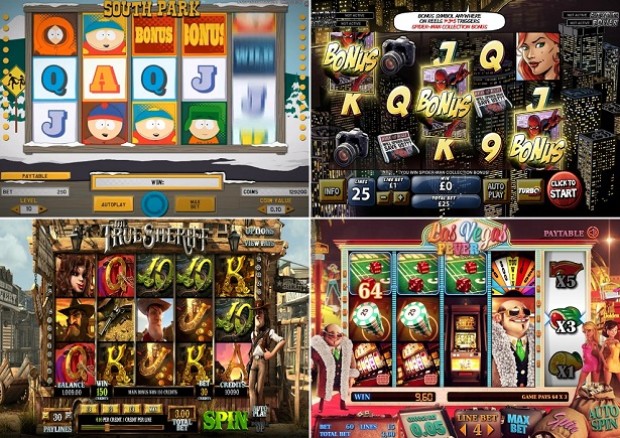 The Dark Knight Rises™ slot machine was actually launched on August 30th, but because it is such an epic slot from Microgaming we decided to give it a mention. If we were going to start discussing slots that were released in August, we could also mention other fantastic titles such as Greedy Goblins from Betsoft Gaming. However, the main purpose of this article is only to discuss the ones that were released throughout September and October 2013.

Almost every major online casino software provider released at least one epic title over the past few weeks and these new online slot machines are all now widely available at various fully licensed online casinos. The other thing which these new titles have in common is that they are all available in the real cash mode and in the free play demo mode, plus they can all be accessed instantly without having to install any kind of software onto your PC or laptop.

Playtech released another branded Marvel slot called Spider-Man: Attack of the Green Goblin and this one is packed with five different Bonus Features and two Spidey ‘on-reels’ Features.

Sheriff Gaming launched a unique 4 reeled slot called Las Vegas Fever. This 3D slot has 5 reels (and 15 winning paylines), but this fifth reel only comes to life after a line win is generated on reels 1 to 4. The purpose of this additional ‘multiplier reel’ is to boost your line wins, plus it can also trigger a Wheel of Fortune bonus. Prizes can also be won from an awesome Click Me bonus and from a Free Spins bonus round.

Realtime Gaming launched two new slots. Both have five reels and 25 winning paylines and both have two different progressive jackpots up for grabs. One of these new slots is called Small Fortune and the other new slot from RTG is called Regal Riches. A software company called Rival also managed to release a new slot called Scary Rich 3 (Scary Rich 3D).

One of the most talked about online slots of the year was finally released by Net Entertainment (NetEnt). Their very latest slot which is also now available on mobile was called South Park. This new slot also has plenty of immersive bonus rounds for players to enjoy and there are several different Wild Symbols.

One of the finest slots to have been released over the past few weeks though was developed by a software company called BetSoft Gaming. Their very latest 3D slot was called The True Sheriff and this is one of the most advanced slots available online today (in terms of graphics and animations).

Some of the other great titles to have been released in recent times included Transformers: Battle for Cybertron from IGT Interactive, 300 Shields by Amaya Gaming and both Bier Haus and Vampire’s Embrace from WMS Gaming. These are just some of the fantastic new online slots that were released over the past few weeks.